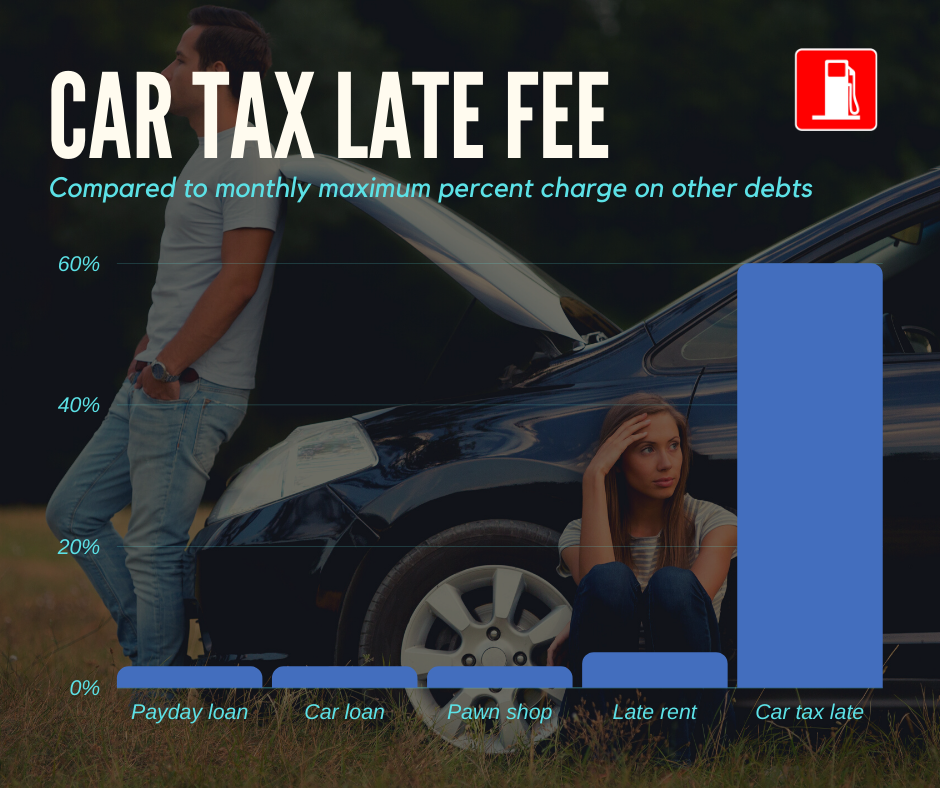 Californians struggling to scrape by know all too well the challenge of deciding which bills to pay now and which will have to be paid later. Unexpected problems like an illness causing them to miss work can mean falling even further behind.

Progressive policymakers have put limits on many types of interest and late charges, but no comparable limits exist when it comes to vehicle registration fees. Paying vehicle registration fees more than 30-days late currently hits motorists with a 60 percent late fee, far in excess of the 5 percent allowed on late rent or the 3 percent monthly APR allowed on car loans, pawn shop loans, and payday loans.

Especially with so many Californians struggling, it’s reasonable to expect the DMV to abide by the same rules that protect people from being exploited by other creditors. According to a 2019 analysis, Californians are the second most likely in the nation to live paycheck to paycheck, following only Hawaii. Housing costs are high, gas prices are high, and people’s wages are often just not enough to pay the bills.

As a result, only 77 percent of Californians renewed their vehicle registration on time in 2015, according to an Eyewitness News report. And that was before 2018, when Senate Bill 1 went into effect, raising gas taxes by 12 cents a gallon and raising registration fee costs by another $25 to $175. Much like the spiraling consequences of falling behind on a debt to a loan shark, these fees can escalate rapidly if not paid on time.

One good friend of mine got a fix-it ticket for an expired registration when he was out of town. A few months and a missed court date later, that fix-it ticket plus the late registration itself, cost him $800 — and had he not come up with the money, the DMV threatened they would take his license and possibly even his vehicle. Another friend had a similar experience with a late registration combined with a fix-it ticket resulting in a $900 bill, even though the original amount owed was closer to $200.

A 2017 report by the Lawyers Committee for Civil Rights of the San Francisco Bay Area found such fines and fees to be excessive and associated punishments, such as the loss of one’s license, to be unnecessarily severe. Among the consequences of these heavy penalties, the Committee found, is its contribution to the disproportionate incarceration of Californians of color.

That same year, former Governor Jerry Brown discontinued the DMV’s practice of suspending people’s driver’s licenses for late fees alone. However, the Governor did not take action to reduce the excessive fees themselves and drivers license suspensions continue if a court date is missed, which can happen easily if the court summons resulting from a fix-it ticket is misplaced or if, as was the case with my friend, the ticket was received in another part of the state and traveling to the court location is far and prohibitively costly.

While policymakers may hesitate to reduce excessive late fees due to potential lost revenue, the Lawyers Committee suggested the opposite may be true, citing data showing collections increased when people were offered reduced fees that they were more able to pay.

Regardless, the same arguments that say people should be protected from predatory charges from car loans, payday lenders, and pawn shops should apply to the DMV, an agency of our own government, which is ostensibly “of the people, by the people, and for the people.”

Micah is Executive Director of the Institute for Gas Price Reduction.